I especially remember what men’s fashion designer Stephen Ferber said to me when we grabbed a coffee at Standard Grill, across the road from his newly opened store in the Meatpacking District. He had been working hard for many days with getting the last details together for the opening of his first store; no time to meet with friends. But it didn’t seem to bother him:

“Sometimes I am by myself. But yet, I never feel alone in New York.”

To start his own brand was a natural step for Stephen Ferber since his whole family has worked in retail. His father was one of the leading and most successful retailers of fashion in Stockholm for thirty years, having a couple of stores of his own, among them several at NK. Stephen himself started his career in the restaurant and night club scene, and was part of opening Restaurang Nox and Sushi Plus, as well as of creating the concept behind the night club Kharma.

“To build a concept, to be innovative and to bring something from dream to reality has always thrilled me. Above all, my drive and determination has become even stronger when I’ve been told by others that things are impossible or nearly impossible.”

When did you decide to move to New York?
“It’s been a dream of mine for over twenty years, ever since I first visited the city. The unique feeling and the vibe that this city has. When I started researching for Stephen F a few years ago my determination to actually move here became even stronger. It took a while, but now I am finally here”.

How does it feel to be here?
“The excitement of living and working in New York, while competing on an international arena, is very stimulating. It might not be for everyone; it requires a special mindset. For me, it’s a World Cup Final every day.”

Stephen describes the brand as classic with an edge. Every collection has its unique story to tell, down to the last garment. It could be the design, the marketing or the choice of material. Everything revolves around creating a positive feeling for the people who wear Stephen F. A feeling that has become easier to convey with the opening of the Meatpacking District store.

Both the New York Rangers goalie Henrik Lundqvist and the super model Alex Lundqvist wear your clothes. What characteristics describe a typical Stephen F customer?
“A well-traveled man who is comfortable in himself and not afraid of going his own way.”

The new collection, for Spring / Summer 2016, is dedicated to New York and called the “Thank you New York City collection”. The pulse and energy of the city has always been a major inspiration, Stephen explains.

“I think that the move to New York was essential to reach the goals and dreams that we have for Stephen F. If you are ready to work hard, and if you have a good product, you are welcomed with open arms, even though there is cut-throat competition here.” 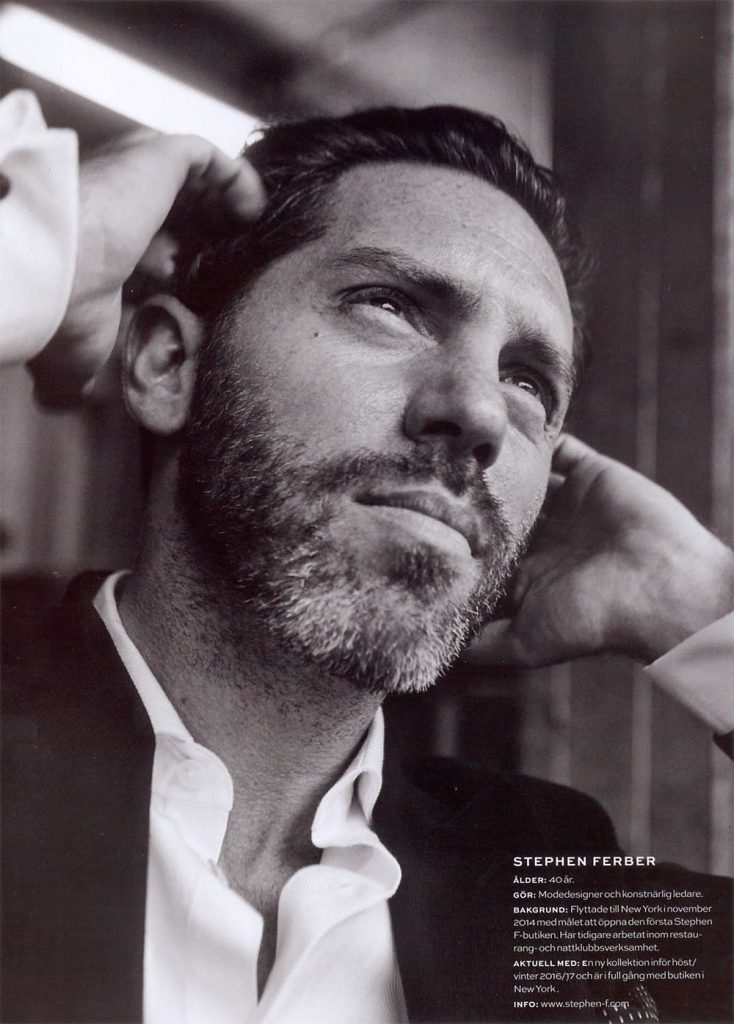